A New Brunswick man serving a life sentence for brutally murdering a fisherman more than 20 years ago has been denied full parole.

William Mazerolle was found guilty of killing Guy Doucet, a 53-year-old man from Nigadoo, a village 18 kilometers north of Bathurst, during a robbery in February, 2001.

The Parole Board of Canada recently held a hearing to review his parole eligibility and the decision was rendered on Jan. 11.

Documents from the decision state that Mazerolle went to Doucet’s home in search of money to help support his drug habit. He attacked Doucet. He wrapped his hands and feet with duct tape. Doucet was then tortured by Mazerolle while he searched for the cash he believed the victim kept in his home.

In the end, Doucet was strangled to death.

Mazerolle had no previous criminal record.

When asked where he sees himself in five years time, he said he hoped to better himself enough to be released, live in a transition house and find work.

According to parole documents, a psychological exam performed in December, 2022 found that Mazerolle is considered a low risk for recurring violence and hasn’t demonstrated issues with impulsivity or anger.

He completed a substance abuse program in 2009 and when possible attends AA meetings. He said he has been sober since 2001.

However, Mazerolle’s records show he has committed offences throughout his incarceration, including damage to government property, uttering threats, self-harm, fires, the possession of prohibited items, and an incident in April, 2022 where he assaulted a prison staff member. 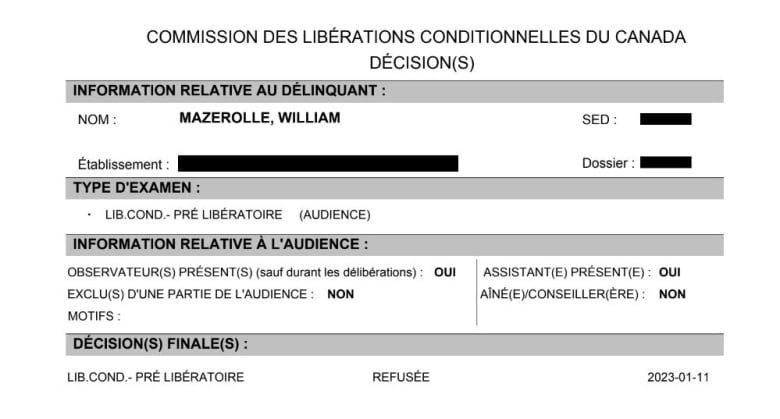 The tribunal noted that Mazerolle’s level of accountability and motivation are moderate and rated his potential for social reintegration as low.

During his time in prison, Mazerolle was diagnosed with bipolar II disorder, for which he’s receiving treatment.

Mazerolle’s parole officer told the tribunal that getting treatment for his mental illness led to stability and conformity in his behaviour. The parole hearing documents said that statement underlines the importance of a proper medication regimen to help manage his emotions and control his behaviour.

His case management team recommended Mazerolle not be granted full parole as they believe his “risk is not manageable in the community.”

The parole board noted full parole may be possible for Mazerolle at a later date, but for now he poses too high of a risk to society.