When a physician can’t get a family doctor, you know there’s a problem.

Dr. Kimberly Thompson attended medical school in the Caribbean, did her clinical training in Chicago, then returned home to Toronto in 2019 to learn her family physician had retired.

“Ever since then, for the last few years, I’ve been trying to find a family doctor,” Thompson said in an interview with CBC Toronto.

Thompson is just one of the estimated 1.8 million Ontarians without a family physician.

That number increased sharply during the pandemic, which spurred hundreds of family doctors to stop practicing, and it’s poised to grow further still with many aging baby-boomer doctors planning to retire.

The trend is triggering a push for solutions to the family doctor shortage: making family practice more attractive to medical school graduates, streamlining family doctors’ paperwork to give them more time to see patients, and giving other health professionals a greater role in primary care.

The family doctor shortage has an impact even on patients who have one, because of ripple effects elsewhere in the health system.

Long-established research has found people without a regular family physician have greater reliance on emergency rooms and are more likely to end up hospitalized.

For Thompson, her go-to source of primary health care has been walk-in clinics.

“Even though the family doctors that I did see there were very helpful … I was constantly having to retell my story, retell my medical history,” she said.

Addressing Ontario’s family doctor crunch is a complex task that won’t be quickly achieved, experts say.  It’s not as simple as increasing the number of spots in the province’s medical schools. 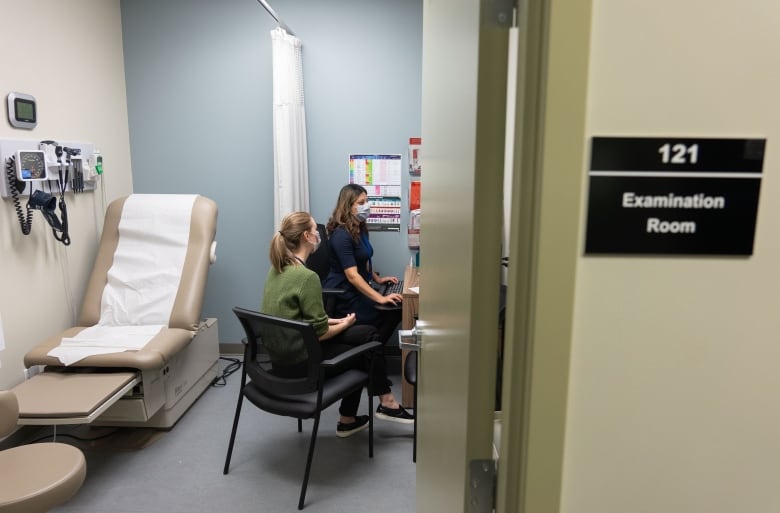 There’s been a steady and significant decline in the proportion of newly trained Canadian doctors choosing family medicine. Those who do make that choice need to find someone within the dwindling crop of currently practising family physicians to supervise them.

“We can say we have a doctor shortage and we need more physicians, but we need to be very strategic about what type of physicians we need where,” Zacharias said in an interview.

Among its key recommendations:

“We need to attract more family doctors into the profession. We also need to provide the right supports to practicing family doctors so that they can spend more time with their patients,” said OCFP president Dr. Mekalai Kumanan in a statement.

A glimpse inside the busy Malvern Medical Centre in the east end of Toronto gives a taste of just how in-demand family doctors are right now.

The clinic’s medical director, Dr. Neil Ingber, says he and his team have tried everything to lure doctors to the practice: advertising, word-of-mouth, and hiring recruiters who specialize in attracting doctors from abroad.

“We have doctors who are interested in retiring, doctors who want to cut back on their practice and a huge demand from patients who need a family doctor,” said Ingber in an interview.

“We have had very little success at recruiting new doctors.”

One exception to that recruitment drought is Dr. Joseph Param, who was born and raised in Toronto, left the country for medical school, and chose to return to the neighbourhood where he grew up to practice family medicine.

Go inside the difficult search for a family doctor

Param said his background as the child of immigrants “allows me to connect with the patients better and build a little bit more rapport and trust with those families, so that does give me a lot of personal satisfaction,”

Param joined the Malvern clinic just before the COVID-19 pandemic began. As one of the few doctors in the area accepting new patients at a time when family physician retirements spiked, his roster filled up almost immediately.

Now, he shows off a stack of envelopes on his desk from Health Care Connect, a Ministry of Health program to match patients with family practitioners. He estimates the envelopes contain the names of about 100 would-be patients in search of a family doctor, and that’s just the referrals that arrived in the past week.

One sign of the scarcity of family doctors, even in the Greater Toronto Area: some of Param’s patients spend more than an hour travelling to get to the clinic, coming from as far away as Hamilton and Bowmanville.

Param’s ideas for helping to solve the family doctor crunch line up with the recommendations from the OMA and OCFP: add more non-physician health professionals into family medicine practices and reduce the administrative burden on family doctors.

The OMA says family physicians typically spend up to six hours a day on administration and documentation, reducing their time for providing direct care to patients and turning some physicians off of family practice.

Paperwork “takes time and it’s time that tends to seep into our personal lives,” said Param.

“One thing that the pandemic has shown is that the physical, mental and emotional well-being of physicians is also important. In order for us to do our jobs properly, we need to make sure that we take care of ourselves.”

On the other side of Toronto, in the city’s west end, there’s a clinic that provides another solution for people not attached to a family doctor.

Staff at the Emery-Keelesdale Nurse Practitioner-Led Clinic provide a team-based model of primary care for hundreds of patients.

In Ontario, nurse practitioners (NPs) are trained and authorized to do many of the things that doctors do: order tests, interpret the results, diagnose illnesses and prescribe medication.

At the Emery-Keelesdale clinic, the NPs work with a small team that includes a dietitian, a social worker and a registered nurse.

There’s been a recent uptick in patients joining the clinic in the wake of their family doctors retiring, says its executive director Danae Peart.

“In this aging society, doctors will retire and we’re not able to replenish doctors fast enough to respond to the needs (of patients), and so that’s the value of having the nurse practitioner-led model,” Peart said in an interview.

There are 26 NP-led clinics scattered around the province, predominantly in rural areas and northern Ontario, where the doctor shortage is most acute.

Peart says she is hopeful that more NP-led clinics will be created.

“I believe that, as we get wiser in the sector, we will realize that having multiple professionals, multiple disciplines in the same space looking out for patient care is actually the best way,” said Peart.

Let us know about your search for a family doctor by filling out the form below: Losing my voice to throat cancer threatened to end my career as a musician. Instead, it was just the beginning