Saint John’s skyline is about to change as two new massive industrial cranes floated into the Port of Saint John on Friday.

Weighing more than 16,000 tonnes, the two super post-Panamax cranes will tower over the current pair by about 30 metres.

“They’re quite bigger than the existing cranes,” said Maksim Mihic, a mechanical engineer by trade, now the CEO and general manager of DP World Canada Inc., the company that owns and operates the cranes.

He boasts they have the same amount of technology equivalent to an airplane or a generating station, but packed into a machine that ‘flies’ by moving a joystick.

Getting these cranes to New Brunswick has been a colossal undertaking.

Coming in from South Carolina, the cranes have been at sea for the last week. They left DP World facilities in Charleston on Jan. 22, travelling up the eastern seaboard bound for Saint John aboard the heavy-load carrier ship, the Hanjin Pioneer.

Weighing more than 16,000 tonnes, the two 115-metre cranes will join the two smaller ship-to-shore cranes on the waterfront.

The cranes were loaded onto the ship using a massive dolly and once lowered, crews spent about a week securing them. That included welding a portion of the cranes directly to the ship, as well as tying them down with massive ropes and cross bracing their legs.

Valued at around $25 million each, it’s a cargo no one is keen to lose.

Plotting a course was the next challenge. Mihic has seen more than 20 similar cranes, built and delivered, in his 25 years with DP World. He says logistics can be half the job.

Crews worked to time this journey north to avoid potential storms and inclement seas that could make for hazardous transport. He said using ships that are big enough to carry mammoth cargo but fast enough to outpace weather, moving at speeds between 15-17 nautical miles an hour, is crucial.

“Storms move slower than that, about 11 or 12 miles, so they are well calculated and designed,” said Mihic about using ships with fast engines. “When you move them around the world they need to … run away from the storm.”

Although the cranes have now reached their destination, Mihic says it will take another week to free them from the Hanjin Pioneer and move them off the ship and bring them ashore. That includes undoing the massive fasteners and cutting through the welds that fused the cranes to the ship.

Offloading will be a meticulous process, he said, that will require using hydraulic jacks to move the cranes onto massive dollies. The Hanjin Pioneer will need to balance itself using ballast to counter the weight of the cranes being unloaded.

It’s a challenging operation, but Mihic says it’s something the company does everyday across the globe.

“You need to use the proper methodology and design, and make sure that you are meeting all requirements, and the vessel well balanced, and the ground pressure is equally distributed that you are not damaging the dock,” said Mihic.

Once the cranes are offloaded, it will take still take weeks to install them. Saint Johners will be able to watch the structures reach their final form between now and March.

“It’ll take us a month after that to go through erection and restoring them to the original configuration and then go to the commissioning certifications and all that stuff,” said Mihic. “So, they would be available at the beginning of March.”

Jane Wilson, a Saint John resident, said having a booming port will make the city more appealing to the rest of the world when it comes to new residents, businesses and infrastructure.

She said she believes Saint John used to be the province’s most powerful city, but Moncton has since taken that role. With the new additions to the city, she thinks Saint John may reclaim top spot.

Wilson said from the cranes to the upgraded rail terminals, she hopes to see the port become “viable like it was in the 40s [or] 50s.” 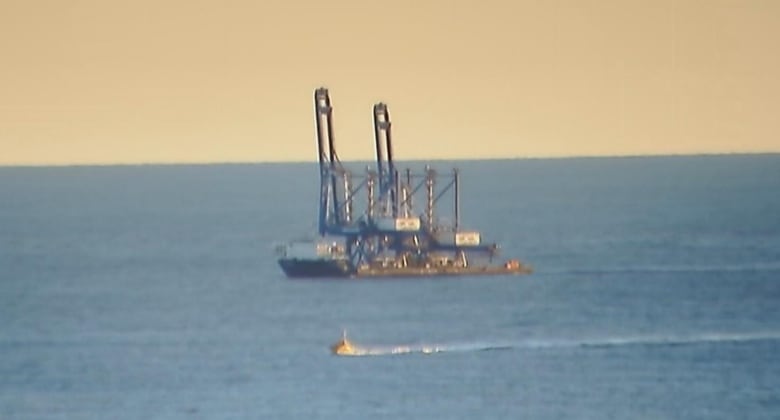 “Here I am at 62, seeing the port come back to what it was before I was born,” she said.

Sandy Robertson, another Saint John resident, stood on the boardwalk ready to take pictures as the cranes came in. He said “it’s something you’re not going to see every day,” which prompted him to go watch.

He said the future of Saint John depends on the port.

“‘It’s great to see the city coming back to life,” said Robertson. “There’s some bright lights coming ahead, and I’m pleased to be a lifelong resident of Saint John.”

The cranes will stand alongside the two already in place at the Port of Saint John. And despite being a bit taller and about seven years younger than their counterparts, these cranes are family. Both sets were constructed in South Carolina by DP World.

“They are sisters,” said Craig Estabrooks, president and CEO of the Port of Saint John. “They’re going to be the exact same colour, they’re going to look alike, just significantly bigger in terms of height.” 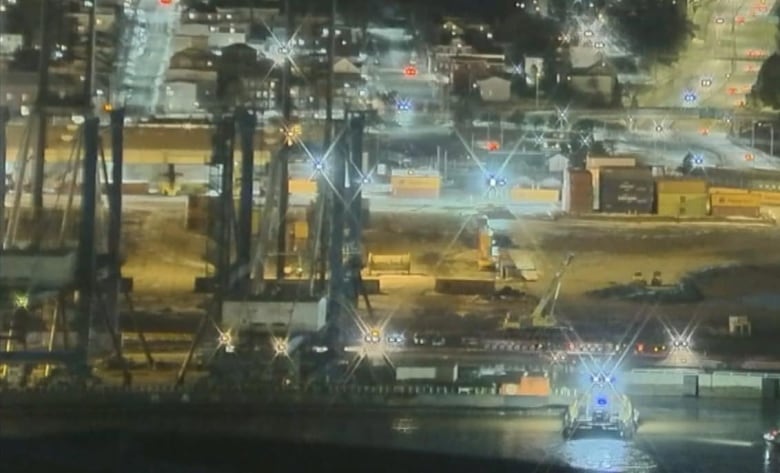 According to Estabrooks, the addition of the new cranes will allow the port to unload much larger container ships. And when used in conjunction with the current cranes they will more than double the amount of cargo that can be unloaded at the port.

Estabrooks likens these cranes to a linchpin in the port’s expansion plans. He says in the years prior, the equivalent of 86,000 containers movd through the port. Last year that grew to 150,000. He sees the two containers as the linchpin of future expansion.

To celebrate the arrivals of the two cranes Estabrooks says there will be a viewing open to the public at the port’s container village on Saturday from noon until 2 p.m. Will there be a 2023 election? Trudeau says no one wants ‘plunge’ into campaign | Globalnews.ca