Montreal teacher Michelle Santilli has special activities set for her Grade 5 students today, as they join others around the world marking International Holocaust Remembrance Day.

The English Montreal School Board (EMSB) educator has planned a lot of discussion, along with writing and art-based activities for her middle schoolers as they explore a pivotal section of Lois Lowry’s Number the Stars. They’ve been studying the award-winning historical novel about a Danish girl — their same age — living through the Nazi invasion during the Second World War.

“The children began to make connections and they realized this is a larger global issue, where a group of people can be targeted … [and] that awakens in the children a sense of civic duty, a sense of right and wrong,” noted Santilli, who has woven Holocaust education into history and language arts lessons this school year.

Though students at this age might often feel powerless, she says, she’s teaching them that “even though you’re a child, you do have a lot more power than you think. Because in learning about these things, [you] can prevent them from ever happening again.”

Classrooms across the country today are exploring the Holocaust and the need for continued conversations about antisemitism and bigotry. Both Holocaust survivors and teachers alike say that ongoing education that centres on survivors telling their stories best capture student attention. 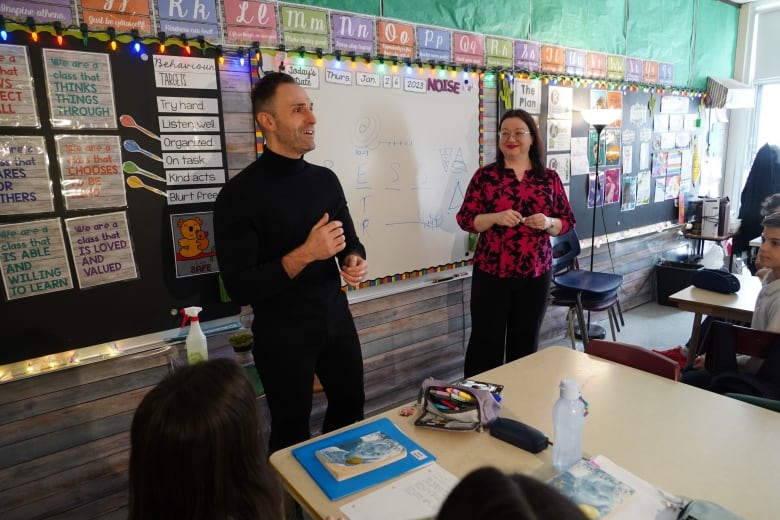 For Santilli, whose board is hosting a special webinar for its classes today, teaching about the Holocaust means teaching about the human experience. “If we are trying to teach children to be good humans, good people, this is part of our history — and it’s not always pretty,” she said.

Last fall, her class took a field trip to the Montreal Holocaust Museum and she says many specific details remain for the 10- and 11-year-olds.

“Our tour guide, she was a survivor of the Holocaust and she said that six million people died and [1.5 million] were kids. And for me, that was very sad, because they didn’t get to have their lives,” said student Giuseppe Vella, who recalled imagining himself in the shoes of a Jewish child at the time.

“If we continue learning about this, we’ll be basically carrying on their story. So people can know [and] so we don’t repeat history ever again,” she said. 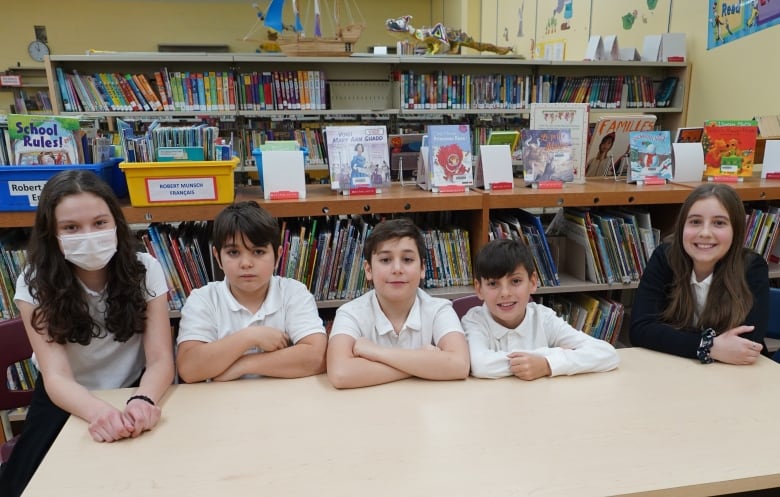 Vince Lacroce helped organize that museum trip. As a community and spiritual animator for the EMSB, he’s part of a team that supports teachers by sourcing guest speakers, arranging events and presenting educational initiatives.

Thanks to a grant from the Jewish Community Foundation of Montreal, the board has been able to more consistently offer and support Holocaust education this school year.

Lacroce’s grandfather was imprisoned during the Second World War and, over the past 15 years, he has heard stories from many survivors and taken regular trips to the Montreal Holocaust Museum. It’s all fuelled his drive to share this knowledge with a new generation.

“These are the last students who will have an opportunity to hear testimonials from the people who witnessed it,” he said, noting the dwindling number of Holocaust survivors.

“If we give the students those tools, with either reading material or visiting museums or speaking to survivors, [it] benefits everyone, so that those ideas and those ideologies that were so wrong never happen again.”

For Pinchas Gutter, it’s “imperative” to continue sharing his experience of the Holocaust, most especially with young people.

Today, the nonagenarian is sharing his message advocating tolerance and care for our neighbours during a live and livestreamed event with the Toronto District School Board.

WATCH | ‘I tell them who I was’: How Pinchas Gutter connects with students:

“Holocaust survivors have a duty to import the knowledge of what happened to them and what is possible, what humanity can get up to. And I think that’s the reason — the main reason — why I feel it’s so important to continue as long as I’m able,” he explained. “To teach people what happened, what is happening, what shouldn’t happen.”

In the era between the two world wars, Gutter recalls how most countries refused to take in Jewish refugees. Today’s greater attention to, and empathy for, refugees inspires him to feel more optimistic — though he admits change comes slowly.

“It’s like a little pebble that lies on the beach and keeps on being washed over by the sea. Over thousands of years, or maybe millions of years, eventually that pebble is nice and smooth and warm, and when you rub it, you feel good about it. Well, the world is the same,” he said. 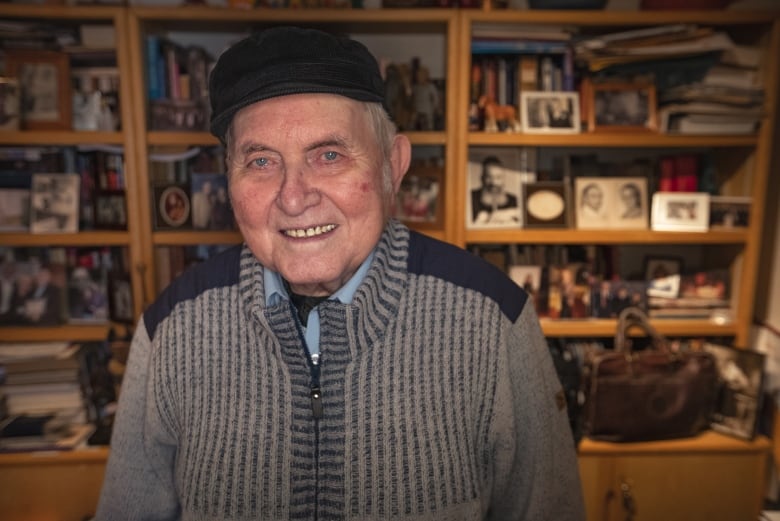 “We don’t know how long it’s going to take for the world to become a place where there’s going to be no wars and people are going to be living happily together without any rancour,” he said. “This is what I try and tell these youngsters and others that every little bit helps.”

Currently in the middle of an exam period, Edmonton-area high school teacher Rita Purdy isn’t leading any special lessons today. However, after participating in a scholarship program that took her to Jerusalem last summer for seminars and workshops at the World Holocaust Remembrance Center, she’s developing a new Holocaust studies option course that she hopes her school — part of the Elk Island Public Schools Division — will offer starting next year.

Canada lacks consistency in when educators begin teaching students about the Holocaust — whether they choose to or are required to at all.

Students in B.C., the Northwest Territories, Yukon and Manitoba might first be introduced to the topic in Grade 5 or Grade 6, with Ontario students set to join this group next school year. In P.E.I. and Nova Scotia, it might debut in Grade 8, while it’s typically not until high school for students in New Brunswick, Quebec and Alberta. 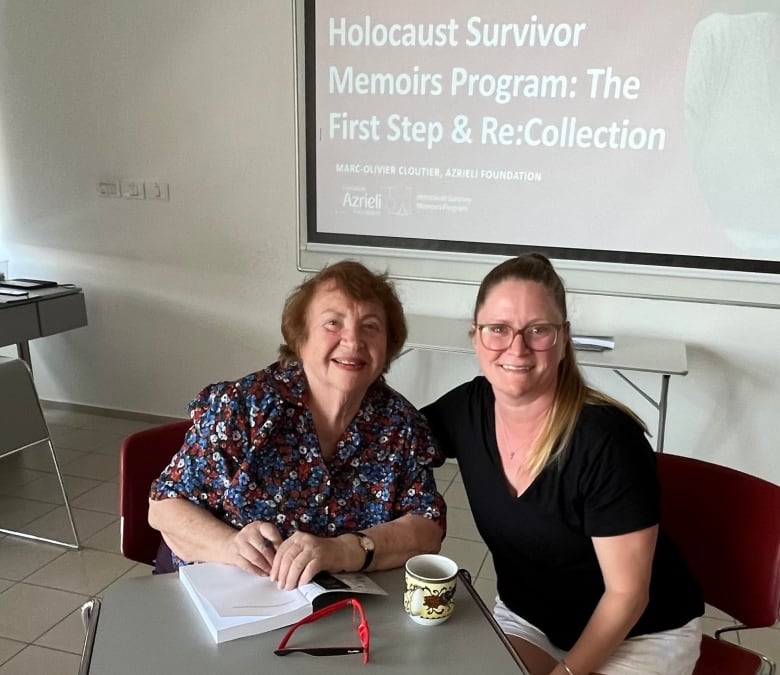 Purdy teaches high schoolers about the Holocaust every year as part of a social studies class required for graduation in Alberta, but it’s one element of a course packed with topics. That’s part of the reason she’s envisioning a more-focused offering.

“Because our curriculum is so jam-packed with tons and tons of facts and figures and events that we’re all stressed to get through, I think it’s really important that we don’t just throw in a movie [to cover the Holocaust],” said Purdy, also head of her school’s social studies department.

Today’s students are constantly in online spaces filled with information that may be hateful and nonfactual, she said, so Purdy thinks educators must keep track of what young people consume, teach them about good choices and provide tools — like media literacy and critical-thinking skills — to help them “differentiate between fact and fiction, conspiracy theories, bias and opinion.”

Students who learn about the Holocaust — including historical events and the societal atmosphere that preceded it — are able to make links to current events, societal movements and acts of bias, according to Purdy.

Still, she says she feels the learning must always start with the stories of those with direct experience.

“Every one of those six million people [killed] was a person who was a mother, a father, a daughter, a son, a cousin and grandparents.… When we hear people as just numbers, we can’t feel that empathy. How a verbal miscue spawned a video and a giant snow sculpture in tiny N.B. village | CBC News