“When the legend becomes fact, print the legend.”

It’s a line from an old Western, often misquoted through decades that can act as a game of telephone.

From the haunted room at the Fort Garry Hotel to purple city at the Manitoba Legislative Building, just like in the Old West, Winnipeg too has countless urban legends whose origins are somewhat of a mystery.

Another such example can be found in many Winnipeg dessert cases – the schmoo torte.

A classic schmoo torte is made up of layers of angel food or chiffon cake mixed with pecans, slathered in whipped cream and drizzled in mounds and mounds of caramel sauce.

Order a slice of schmoo in most bakeries outside of the province and you’ll likely be served up a confused expression. In Winnipeg, it’s met with a knowing smile.

Barbara Reiss founded the catering business Desserts Plus in the ‘80s. Even then, schmoo reigned supreme.

“It was just one of the top tortes we ever did, and it was the de rigueur of every pastry table,” she said. 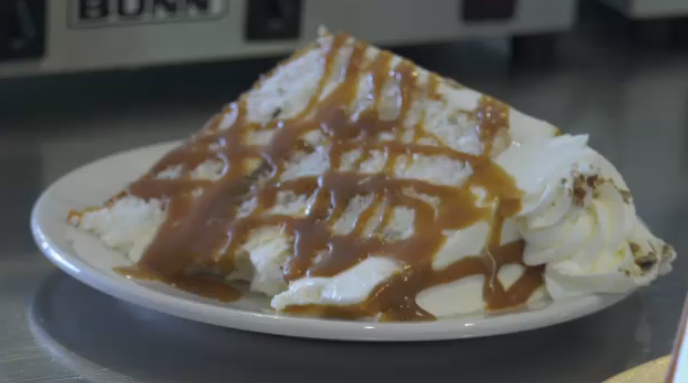 Beth Grubert has been serving up slices of schmoo at Baked Expectations for 39 years. She said it remains one of her most popular menu items.

However, anyone looking to learn more about the beginnings of schmoo will find an often rewritten, never sourced anecdote; “the Schmoo torte was first invented by a mother for her son’s bar mitzvah in Winnipeg, Manitoba.”

The mother in question is never named. A casual Google search doesn’t turn up the cake’s creator, either.

It’s a mystery to those in the Winnipeg food community, as well.

“There were always rumblings from the very beginning,” said Beth Grubert, owner of Baked Expectations.

Schmoo was on the menu when Grubert first started serving up towering tortes and succulent slices at Osborne Village’s iconic sweet shop 39 years ago.

“It was one of the most popular cakes and it remains so,” she said. “(The name) dates back to the Li’l Abner cartoon strip, but it was sort of in reference to all that is good and plentiful.”

Over the years, Reiss has heard many accounts as to who created the torte. Notably, she heard tell that Alyshia’s Restaurant was one of the first eateries to serve it up, noting it was popular in the Ukrainian community, as well.

THE SWEET SUCCESS OF A FEMALE ENTREPRENEUR

When asking around the Jewish community as to the iconic dessert’s inventor, one name not found in the history books was also reported back – Dora Zaslavsky.

A Russian immigrant who came to Winnipeg in 1914, Zaslavsky showed a talent for cooking from a young age, helping her family in the kitchen.

“She was extremely good at it, but not in a measured way, in a ‘let me get my finger in and taste’ sort of way,” recalled her granddaughter Shannon Aceman, who spoke to CTV News from her home in Vancouver, B.C. 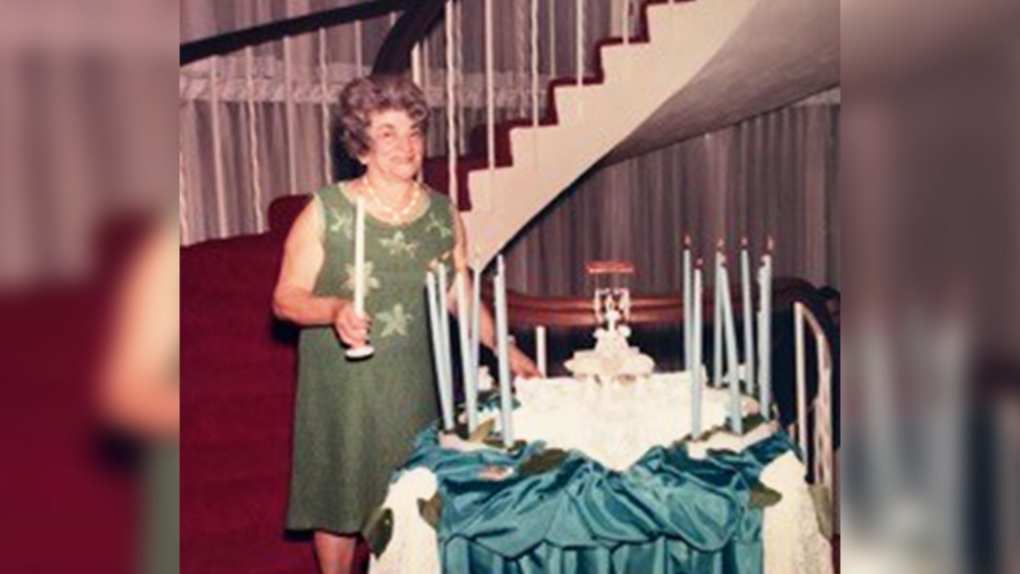 Dora Zaslavsky is an icon of Jewish-Canadian baking. She founded and ran an international catering company based in Winnipeg that enjoyed a 60-year run at a time when female entrepreneurs encountered countless barriers. (Image Source: Shannon Aceman)

According to an interview done with Zaslavsky and archived through the Jewish Heritage Centre of Western Canada, she first started selling dainties to help support her family when her then-husband Mayer fell ill.

Then, she catered a wedding for 50 guests, and then another for 350. Soon, word of mouth about her delicious food spread around the Jewish community. It inspired Zaslavsky to start a catering business out of her North End home called Menorah Catering.

“Then, when they moved the business about 15 years later and took space on Main Street, they hoped to attract more than just a Jewish following, so they changed the name of the business to Galaxy Catering, and that was really where things took off,” Aceman said.

It eventually expanded across Canada and into the United States.

However, she didn’t bake the dish that would become the sweet stuff of Winnipeg food fables until 1948, when her son Murray was to have his bar mitzvah.

“He wanted a special cake that wasn’t at everybody else’s bar mitzvah,” Aceman, who is Murray’s daughter, recalled.

“She came up with something called a schmoo torte, which was basically a mix of about three or four of her other best-known recipes for cakes with the rum torte, and you ended up with the most delicious melange of flavours.” 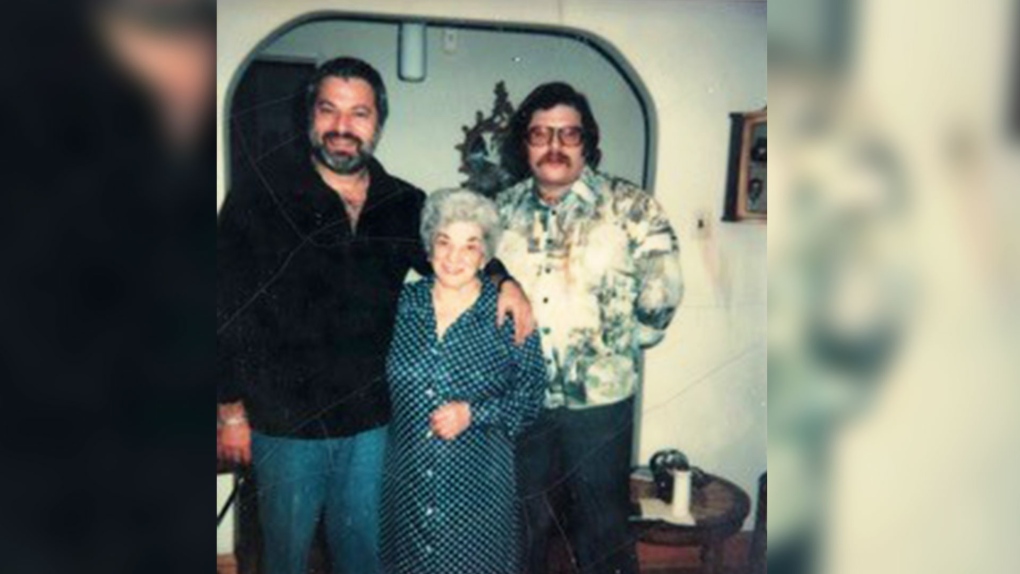 Winnipeg baker and caterer Dora Zaslavsky is shown in a family photo with her sons Irving Zaslavsky (left) and Murray Zaslov (right). According to family, It was for Zaslov’s bar mitzvah in 1948 that Zaslavsky first baked schmoo torte. (Image Source: Shannon Aceman)

It was even a favourite of Harry Belafonte, the multi-talented Jamaican-American singer, actor and activist.

Aceman joked her baba was in love with him, following him on tour from show to show.

“She started sending him schmoo tortes for he and his crew to appreciate after the show,” she said.

“They actually became friendly, and he would have his tour manager call her and give her all of the tour dates in several key cities, and she would arrange to have this special cake for Harry Belafonte and his stage crew.” 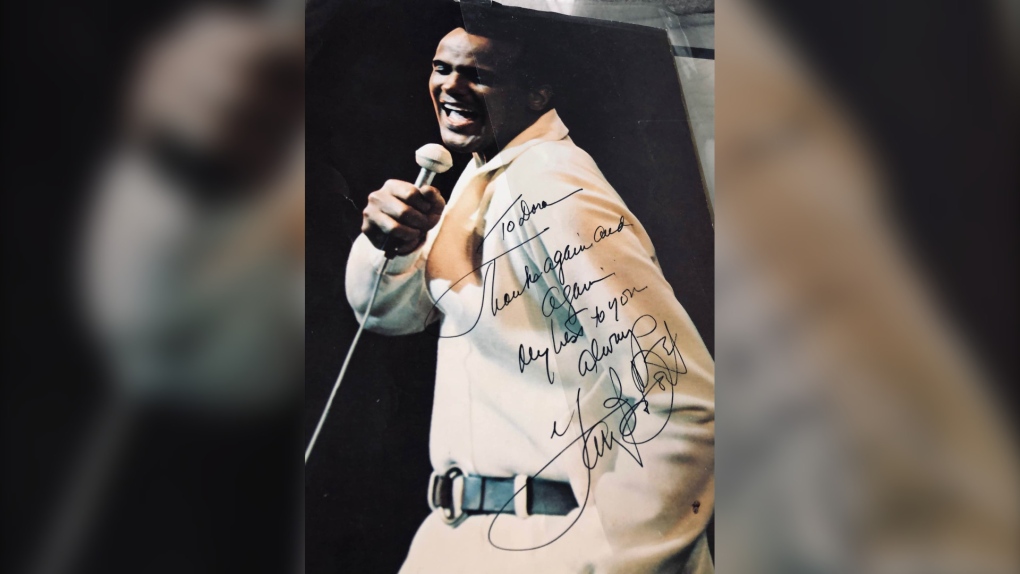 According to Shannon Aceman, Harry Belafonte was a big fan of her baba Dora Zaslavsky’s schmoo torte, and would arrange to have it sent to his various tour stops across North America. (Image Source: Shannon Aceman)

Jewish Food Historian Kat Romanow said schmoo is reminiscent of nusstorte, a central-European dessert popularized in the 17th century. She said it’s common for dishes to take on many iterations through waves of immigration.

As Jewish people fled Europe and settled in Canada, she explained, they brought the food of their homelands, but sometimes had to make a few tweaks to suit what was available at the local grocery store.

“Some of these dishes, they retained their character but then also took on a new character because of not necessarily being able to get the exact ingredients that they were originally made with,” Romanow said.

“In many cases, the dishes that Ashkenazi Jews brought with them to Canada came to be iconic dishes of their new homes. So for example, in Montreal, we have bagels and smoked meat, there are blueberry buns in Toronto and the schmoo torte in Winnipeg.”

Decades after Zaslavsky made her first schmoo torte for that fateful bar mitzvah, it remains a favourite at Baked Expectations.

Grubert said it will always have a place on her menu.

“We love having it. We love that people know that we’re known for it, that we have been here for so long and it is always here when they come,” she said. 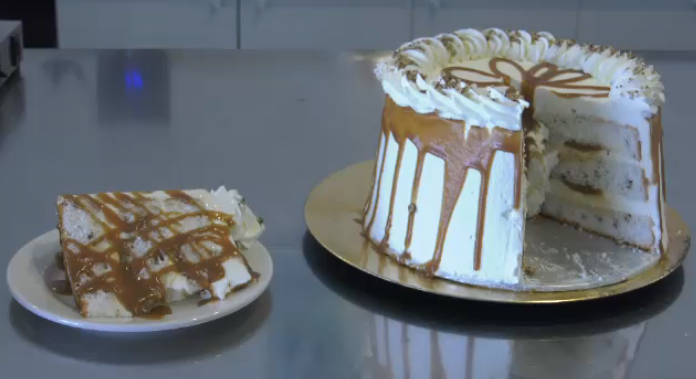 Reiss, who has since hung up her catering apron herself, was previously mentored by Zaslavsky, even taking over her Main Street catering space.

She had never heard that Zaslavsky was the schmoo’s inventor, but said it wouldn’t surprise her.

“Good on her,” she said. “Dora was the beginning of everything.”

Although her name may not be etched just yet in the digital history books, Aceman said her baba remains a legend in the Jewish community, stretching even outside Manitoba’s borders.

“I don’t know how many people have come up to me in the last 30 years since I lived (in Vancouver) to say, ‘Your grandmother catered my bar mitzvah,’ or ‘I remember the baking at so-and-so’s wedding.’ She’s really found her place in history in terms of Jewish baking,” Aceman said.

Despite its enduring popularity on Winnipeg menus, she said no schmoo holds a candle to the original.

“I have a really hard time eating anyone else’s schmoo,” Aceman said. “None of them are as good as my baba’s, but I’m biased.”