Steps away from a Brampton courthouse where his attackers were found guilty, Mohammed Abu Marzouk spoke out for the first time since the beating that nearly ended his life, calling for all Canadians to stand up to hate.

To see him standing there, one might never guess he suffered more than 10 skull fractures and was almost killed by two men who attacked him, yelling, “f–king Arabs!”

It’s a far cry from the images that emerged after the attack on July 15, 2018, when the father of two lay unconscious in a hospital bed, his head wrapped in a thick white bandage, an oxygen mask over his face, tubes and wires criss-crossing around him.

“The pain will stay, nothing will erase it,” he told reporters. “I still encourage every Canadian to stand against hate because Canada has no place for hate.”

On Tuesday, the two men charged with beating the Mississauga man within an inch of his life were found guilty of aggravated assault but not guilty of attempted murder.

Brothers Janis Corhamzic and Adem Corhamzic, who were previously charged with aggravated assault and assault in the attack, were found guilty at a judge-alone trial in Superior Court in Brampton on Tuesday. The pair was also convicted of the assault of Fuat Yucel, a friend of the victim who tried to intervene.

The attack left Abu Marzouk’s family forever changed — the large scar still visible on the back of his head a reminder of the incident that nearly took his life.

Speaking to reporters outside the courthouse, Abu Marzouk was relieved the legal process was over and called the support of the community and the public “a blessing.”

WATCH | Mohammed Abu Marzouk on the pain he says ‘nothing will erase’:

Court heard Tuesday the father of two suffered 10 to 15 skull fractures and brain bleeding resembling the injuries one might see in a car crash. His attackers, meanwhile, could be heard yelling, “F–king Arabs!, f–king terrorists.”

Those comments are among the reasons police considered the crime “hate-motivated.”

Justice Fletcher Dawson acknowledged the hateful nature of the attack in his decision, but said he believed it to be “anti-Arab, not anti-Muslim.”

During the attack, Abu Marzouk’s four- and six-year-old daughters could be heard asking if their dad had died and if they would ever see him again, court heard. “Our dad is going to die,” the girls were heard saying from the family’s van that day.

“This did not deter the accused,” Dawson said.

The defence argued the fight was consensual and there was no intent to kill.

On the charge of attempted murder, Dawson agreed the pair were not guilty.

“I am unable to say I am satisfied beyond a reasonable doubt of their intent to kill,” he said. “That said, this was a close case.”

Abu Marzouk’s wife, Diana Attar, could be seen shaking her head at the result.

In a statement Tuesday, Attar said the night of the attack, the family saw “the darkest side of humanity, one that we would not wish upon anyone.”

“Today’s verdict offers some closure as we await sentencing. But we know we have a much longer road to recovery,” she added in part.

WATCH | Wife of victim speaks exclusively to CBC News in 2018:

It was a warm July evening when Abu Marzouk and his family were in their vehicle and about to head home from a picnic at a Mississauga community centre. As they went to leave, the family says two men approached shouting, “You didn’t see us.”

Police said at the time there was no indication anyone was struck by a vehicle before the attack.

Abu Marzouk got out of his vehicle to talk to the men and that’s when one of them punched him the face. In court Tuesday, the judge found it was Janis Corhamzic who initiated the fight, with Abu Marzouk pushing back only after he was first assaulted.

Nearby, she spotted a police car and ran to ask for help. When she returned, her husband had fallen to the ground, blood spilling from his ear and pooling around his head. Moments later, he lost consciousness and Attar began reciting prayers that Abu Marzouk would survive.

Court also heard from a police officer who testified he remembered the incident like it was yesterday. Even four and half years after the incident, he maintained it was “the most gruesome event” he’d ever witnessed.

That officer also testified he drew his firearm because he thought the kicking “might kill” Abu Marzouk and the attackers did not listen to his instruction to “get on the ground.”

Court heard Abu Marzouk was kicked repeatedly in the head in what one witness described as an act fuelled by hate.

“It was like they were trying to kick a soccer ball as far as they could,” court heard from one witness.

Abu Marzouk was rushed to a Toronto trauma centre, where almost immediately, he was taken into surgery and put on a breathing tube. Attar previously told CBC News surgeons “removed a part of his skull” to stop the bleeding. 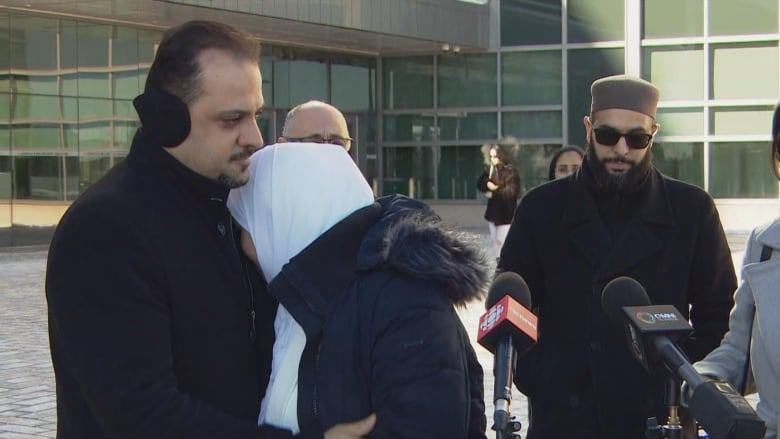 The National Council of Canadian Muslims said the struggles that the two families have faced represent “the hidden and unreported reality of suffering an Islamophobic attack in Canada. Traumas do not end when the attack ends.”

The group says families are often left grappling with physical, mental, social and financial difficulties long after such incidents and is calling for the federal government to create a national support fund for victims of hate-motivated crimes.

Asked if it was disappointed the pair wasn’t convicted of attempted murder, the council added it will be reviewing the decision and will have more to say after that.

Ibrahim Hindy, imam at the Dar al-Tawheed mosque, where both families pray, told reporters said he was happy to hear from the judge a recognition of how “heinous” and “hateful” the attack was.

“I hope that both of those things are reflected in sentencing so that these families can finally get some closure and can get some semblance of justice.

“Because there’s never going to be complete justice for what they’ve faced.”

Sentencing submissions for the trial are expected to begin March 31.