“These heavily armoured and highly protective vehicles provide soldiers with a tactical advantage on the battlefield thanks to their excellent mobility, their firepower and their survivability,” Anand said.

“These tanks will allow Ukraine to liberate even more of its territory and defend its people from Russia’s brutal invasion. These four tanks are combat-ready and will be deployed over the coming weeks.”

The defence minister said CAF members will be deployed “pending coordination with allies” to ensure that Ukrainian forces can operate and maintain the Leopard 2 tanks.

When asked why Canada was providing only four tanks — and if more tanks could be provided later — Anand said Canada would only donate vehicles it can support in the field with spare parts and training.

She also said Canada needs to ensure the CAF has what it needs to function.

“We need to make sure that our army has the right number of tanks to train and to meet our NATO commitments,” she said. “So there is the possibility of further donations.”

Anand said CAF will replace the tanks as soon as possible, but would not say when that would happen.

For weeks, Ukraine has been asking its allies to supply it with up to 300 German-made Leopard 2 battle tanks. Several allies have those tanks in their inventories but were unable to donate them until Germany approved them for export.

On Wednesday, German Chancellor Olaf Scholz announced that his country would provide Ukraine with 14 Leopard 2 tanks from his own military.

Germany made the announcement on the same day U.S. President Joe Biden told reporters in Washington that the United States will send 31 M1 Abrams tanks to Ukraine.

Germany, which was reluctant to incur Russia’s wrath alone by sending tanks, had said the Leopards would not be sent unless the U.S. put its Abrams on the table. The U.K. announced last week that it would send 14 Challenger 2 tanks to Ukraine.

“The tanks that Canada and allies are providing will be a game changer in the fight for the liberation of Ukrainian territories from brutal Russian occupation,” she said in a statement.

A question of maintenance

Canada bought its Leopards from Germany during the war in Afghanistan. They’re split up into squadrons of 19 tanks each, with two squadrons in Edmonton and a third at CFB Gagetown, N.B. Most of the rest are at the armour training school in Gagetown.

The Canadian Armed Forces has 112 Leopard 2s in its inventory. They include 82 designed for combat and 30 that are used for engineering purposes and recovering disabled vehicles. Many are not battle-ready because of maintenance issues.

According to a paper published last year by the Royal Military College, “the poor serviceability rate of the Leopard 2 main battle tanks is an endemic issue and a strategic-level concern since implementation.” 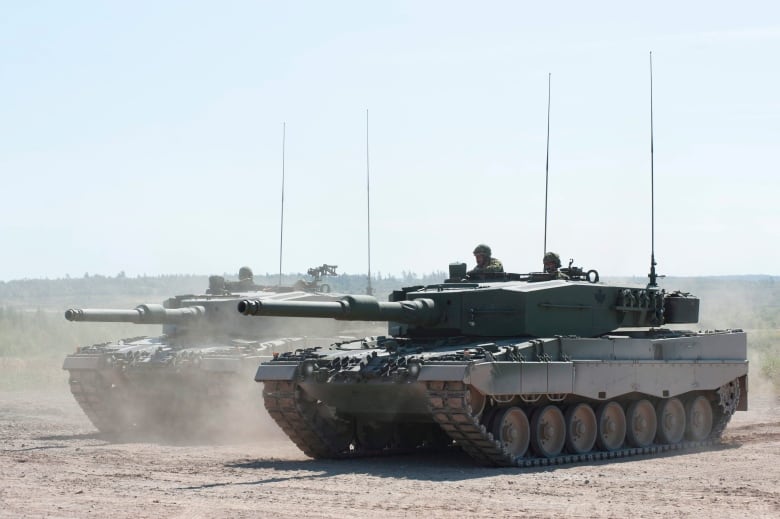 The paper blamed the maintenance problems on a lack of infrastructure, technicians and spare parts.

Anand said that Canada’s contribution to Ukraine’s tank fleet will be assessed to ensure the tanks can be maintained on the battlefield.

“I want to stress that maintaining tanks is difficult, especially in light of the complexity of this vehicle,” she said.

“This is not just like changing oil in a car. This is a need to make sure that we have continued flow of spare parts, that are able to be received to maintain the tanks and then to utilize them where necessary.”

Gen. Wayne Eyre, chief of the defence staff, said the Leopard 2 A4 tanks that Canada is providing to Ukraine are of the same make and model as the tanks that Finland and Poland are promising, which will allow Ukraine to swap parts and personnel.

Eyre said it helps that there are thousands of Leopard 2 tanks operating in the militaries of countries across Europe.

The tanks will be challenging for Canada to deliver, Eyre said, but they can be flown to Europe in a C-17 Globemaster one at a time.