Canada is considering contributing four Leopard 2 tanks to Ukraine, senior sources told CBC News — but no decision has been made.

The government could announce the donation of tanks as early as Thursday, the sources said.

CBC News is not identifying the confidential sources because they were not authorized to speak publicly.

One source said Canada is likely to send Ukraine the A4 variant of the tank — the oldest in the Canadian military’s inventory. Canada bought the A4s from the Netherlands during the Afghan war.

The Globe and Mail first reported the number of tanks that Canada may send to Ukraine’s war effort.

Earlier Wednesday, Prime Minister Justin Trudeau said his government will provide more support to Ukraine but declined to join allies in announcing a donation of German-made tanks to fend off Russian forces.

“We will continue to be there to give whatever support we can to Ukraine,” Trudeau said. “I won’t be making an announcement today but I can tell you we’re looking very, very closely at what more we can do to support Ukraine.”

Trudeau made the remarks in Hamilton, Ont., where he is attending a cabinet retreat in advance of the return of Parliament.

For weeks, Ukraine has been asking its allies to supply it with up to 300 German-made Leopard 2 battle tanks. Several allies have those tanks in their inventories but were unable to donate them unless Germany gave its approval for the vehicles to be transferred to a third party.

Earlier Wednesday, German Chancellor Olaf Scholz announced that his country would provide Ukraine with 14 Leopard 2 tanks from his own military.

German Defence Minister Boris Pistorius said that Germany advised several allies of its plan ahead of the announcement, including Canada.

“Germany will always be at the forefront when it comes to supporting Ukraine,” Scholz said later in an address to lawmakers in the German federal parliament.

Germany made the announcement on the same day U.S. President Joe Biden told reporters in Washington that the United States will send 31 M1 Abrams tanks to Ukraine.

Germany, which was reluctant to incur Russia’s wrath alone by sending tanks, had said the Leopards would not be sent unless the U.S. put its Abrams on the table.

The U.K. announced last week that it would send 14 Challenger 2 tanks to Ukraine. 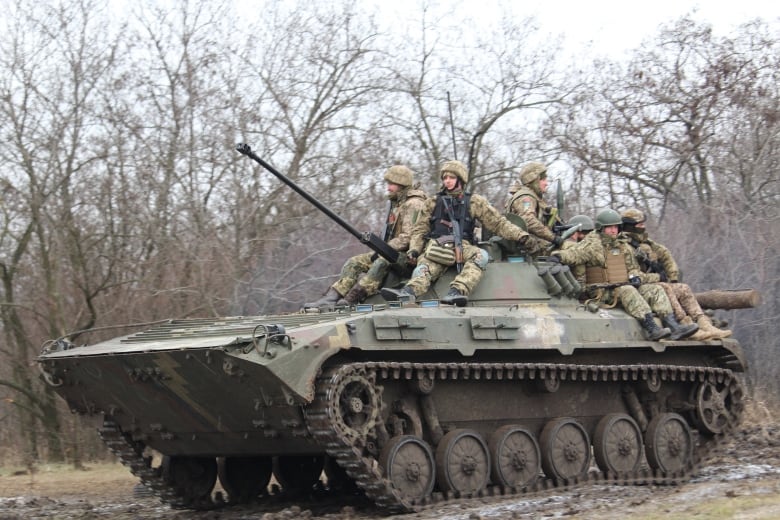 Walter Dorn, a professor of defence studies at the Royal Military College, said the donations announced by other countries ramped up the pressure on Canada to do the same.

“I think there will be pressure from the United States for Canada to pony up on the Leopard-2 tanks, because Leopard-2s will be the mainstay of the Ukrainian tank forces,” he said.

Dorn said that the Abrams tanks are very different from the Leopard-2 tanks and allies likely want Ukraine to have a more uniform fleet of vehicles to ensure they can be supported with parts and repairs on the battlefield.

Dorn said the German announcement is significant because it allows Ukraine to counter Russian advances into Ukraine and launch attacks of its own.

“It’s potentially a game-changer because it adds much more punch to the Ukrainian forces,” Dorn told CBC News. “They are an entire generation better.

“The Western weapons are heavier, they’ve got better armour, they can pack more punch, they have the capacity to take territory more easily. Really, the [Russian] T-72s can’t stand a chance against these more modern weapons.”

Dorn said that while Ukraine has asked for 300 tanks, having just 100 of these vehicles would make a significant difference on the battlefield.

Germany said the tanks will not be battle-ready for several months.

Dorn said it will take time to train crews and build the maintenance facilities required to keep the tanks operational.

The Canadian Armed Forces has 112 Leopard 2s in its inventory. They include 82 designed for combat and 30 that are used for engineering purposes and recovering disabled vehicles. Many are not battle-ready because of maintenance issues.

According to a paper published last year by the Royal Military College, “the poor serviceability rate of the Leopard 2 main battle tanks is an endemic issue and a strategic-level concern since implementation.”

The paper blamed the maintenance problems on a lack of infrastructure, technicians and spare parts.

Forces won’t say how many tanks are battle-ready

Retired lieutenant-general and former Canadian Army commander Jean-Marc Lanthier said in an interview with the Canadian Press that any donation almost certainly will have to balance the needs of Ukraine against the potential impact on Canada’s military.

“Getting rid of any tanks — because we have so few, and so few that are actively working — would have an immediate impact on the level of readiness of the Army,” said Lanthier, who served as an armoured officer.

“Is that something that should stop us from sending tanks? I think we have a moral responsibility in terms of the immediacy of the requirements of the Ukrainian Armed Forces and the Ukrainian people. They are fighting a war. We are not.”

Canada bought its Leopards from Germany during the war in Afghanistan. They are notionally divided into squadrons of 19 tanks each, with two squadrons in Edmonton and a third at CFB Gagetown, N.B. Most of the rest are at the armour training school in Gagetown.

“And normally you keep a bunch of them at a depot ready to be deployed, but that’s not something we’re doing necessarily because we don’t have the numbers,” said Lanthier.

Department of National Defence spokesperson Andrew McKelvey would not comment Wednesday on what percentage of the military’s Leopard 2s are currently battle-ready, and how many are out of service for maintenance or other reasons.

“Tank maintenance is similar to aircraft maintenance, and the status of the fleet at any given moment depends on a comprehensive maintenance, repair and overhaul schedule, which is tied to specific requirements for training or operational employment,” he said.

“For operational security reasons, we cannot specify how many Leopard 2s are being maintained at any given time or give indication of their maintenance schedule.”

The question facing the government will be whether the benefit of sending tanks to Ukraine outweighs the impact on the military, Lanthier said. If it does, another question will be whether those tanks would be replaced — and if so, how quickly.