An all-female caribou hunting expedition returned home to a heroine’s welcome Saturday in the Naskapi community of Kawawachikamach in northern Quebec.

The seven-woman group left the community on Jan. 13 and travelled, in total, more than 1,500 kilometres by snowmobile, over eight days from Kawawachikamach to the far eastern reaches of Cree territory near Caniapiscau and back again.

“This is something that I’ve always wanted to do,” said Louise Shecanapish, who organized the expedition. She had been on a men’s hunting trip about 10 years earlier as the expedition cook.

Shecanapish works as the cultural co-ordinator for Kawawachikamach, a community of approximately 650 people north of Sept-Îles on the north shore of Quebec. She admits to being anxious initially, as the expedition was taking shape.

“It’s a really tough trip. I know how these trips are and they’re very challenging,” said Shecanapish, adding there can be hours lost in the slush and very demanding physical issues to deal with. 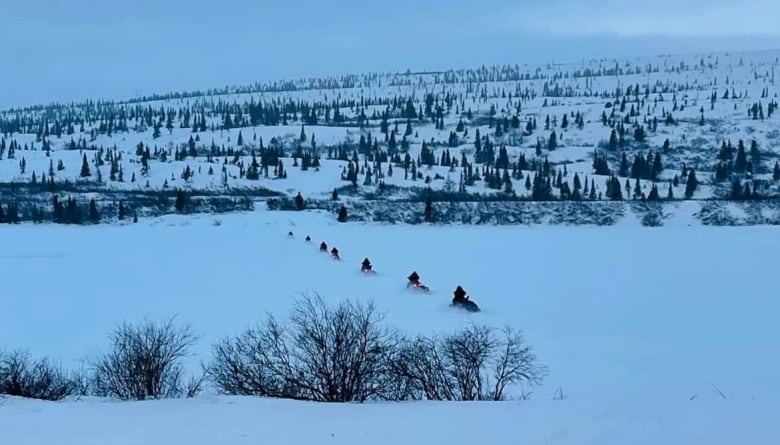 None of the women were experienced hunters and two of them had never been on a snowmobile expedition before.

“I was very impressed with the women. It was probably one of the easiest trips I’ve been on,” Shecanapish said, adding she felt proud of what they accomplished, from packing up their sleds, gassing up the snowmobiles and hauling 170-litre tanks of fuel to the campsite.

“[We] helped each other when we got stuck and learned from each other,” said Shecanapish, saying the more experienced among them shared their knowledge. The group was also very grateful for the chance to speak Naskapi and learn words tied to the hunt and the land.

Three male guides, who were experienced hunters and riders, accompanied the group from Kawawachikamach. And the group campsite was located at the far eastern reaches of Cree territory on the trapline of Robbie Tapiatic.

“I was very impressed how they handled their skidoos,” said Tapiatic in Cree. “When I was at the top of the mountain, I was so happy and proud to see their skidoo lights coming from afar. I was happy the land was used and our ancestors would have been proud.”

Annie Vollant helped in the trip preparation and is the partner of one of the Naskapi guides. She said the women have already inspired many in the community and elsewhere.

“On Facebook there are already comments. Women in more urban areas say they want to try the same thing too. There is even [another] group of women Naskapies who also want to leave. This expedition will snowball,” said Annie Vollant in French, in an interview with Radio-Canada.

The group has given five of the harvested caribou to be used as part of some local traditional-skill workshops happening this week in Kawawachikamach. All parts of the animal will used, said Vollant.

And the rest of the harvest will be shared between the hunters and their families.

Shecanapish said the group started out knowing each other, but have finished their groundbreaking hunt as sisters.

“They’re family. We were all very thankful that we experienced it together,” said Shecanapish. Preserving the Distinct Language of Newfoundland